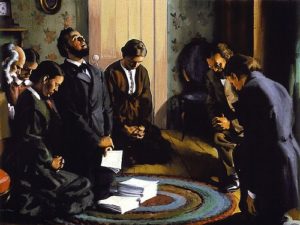 Doctrine of a Trinity
Subversive of the Atonement

It is not our purpose to present any argument on the doctrine of the trinity, further than it has a bearing on the subject under consideration, namely, on the Atonement. And we are willing, confidently willing to leave the decision of the question with all who will carefully read our remarks, with an effort to divest themselves of prejudice, if they unfortunately possess it. The inconsistencies of Trinitarians, which must be pointed out to free the Scripture doctrine of the Atonement from reproaches under which it has too long lain, are the necessary outgrowth of their system of theology. No matter how able are the writers to whom we shall refer, they could never free themselves from inconsistencies without correcting their theology.

Many theologians really think that the Atonement, in respect to its dignity and efficacy, rests upon the doctrine of a trinity. But we fail to see any connection between the two. To the contrary, the advocates of that doctrine really fall into the difficulty which they seem anxious to avoid. Their difficulty consists in this: They take the denial of a trinity to be equivalent to a denial of the divinity of Christ. Were that the case, we should cling to the doctrine of a trinity as tenaciously as any can; but it is not the case. They who have read our remarks on the death of the Son of God know that we firmly believe in the divinity of Christ; but we cannot accept the idea of a trinity, as it is held by Trinitarians, without giving up our claim on the dignity of the sacrifice made for our redemption.

And here is shown how remarkably the widest extremes meet in theology. The highest Trinitarians and lowest Unitarians meet and are perfectly united on the death of Christ—the faith of both amounts to Socinianism. Unitarians believe that Christ was a prophet, an inspired teacher, but merely human; that his death was that of a human body only. Trinitarians hold that the term “Christ” comprehends two distinct and separate natures: one that was merely human; the other, the second person in the trinity, who dwelt in the flesh for a brief period, but could not possibly suffer, or die; that the Christ that died was only the human nature in which the divinity had dwelt. Both classes have a human offering, and nothing more. No matter how exalted the pre-existent Son was; no matter how glorious, how powerful, or even eternal; if the manhood only died, the sacrifice was only human. And so far as the vicarious death of Christ is concerned, this is Socinianism. Thus the remark is just, that the doctrine of a trinity degrades the Atonement, resting it solely on a human offering as a basis. A few quotations will show the correctness of this assertion. (J. H. Waggoner, 1884, The Atonement In The Light Of Nature And Revelation, pages 164, 165)

We trust that we have shown to the full conviction of every one who “trembles at the word” of the Lord, that the Son of God, who was in the beginning, by whom the worlds were made, suffered death for us; the oft-repeated declarations of theological writers that a mere human body died are, by the Scriptures, proved untrue. These writers take the doctrine of a trinity for their basis, and assume that Christ is the second person in the trinity, and could not die. Again, they assume that death is not a cessation of life; and between the two unscriptural assumptions they involve themselves in numerous difficulties, and load the doctrine of the Atonement with unreasonable contradictions. We would not needlessly place ourselves in opposition to the religious feelings of any class, but in order to clear the doctrine of the Atonement from the consequences of these assumptions, we are compelled to notice some of the prominent arguments presented in favor of the doctrine of a trinity.

In the “Manual of Atonement,” 1 John 5:20 is quoted as containing most conclusive evidence of a trinity and of the Supreme Deity of Christ. It is there claimed that he is called “the true God and eternal life.” The whole verse reads thus: “And we know that the Son of God is come, and hath given us an understanding that we may know him that is true, and we are in him that is true, even in his Son Jesus Christ. This is the true God and eternal life.” A person must be strongly wedded to a theory who can read this verse and not see the distinction therein contained between the true God and the Son of God. “We are in him that is true.” How? “In his Son Jesus Christ.” The distinction between Christ and the true God is most clearly shown by the Saviour’s own words in John 17:3: “That they might know thee, the only true God, and Jesus Christ, whom thou hast sent.”

Much stress is laid on Isa. 9:6, as proving a trinity, which we have before quoted, as referring to our High Priest who shed his blood for us. The advocates of that theory will say that it refers to a trinity because Christ is called the everlasting Father. But for this reason, with others, we affirm that it can have no reference to a trinity. Is Christ the Father in the trinity? If so, how is he the Son? or if he is both Father and Son, how can there be a trinity? for a trinity is three persons. To recognize a trinity, the distinction between the Father and Son must be preserved. Christ is called “the second person in the trinity;” but if this text proves a trinity, or refers to it at all, it proves that he is not the second, but the first. And if he is the first, who is the second? It is very plain that this text has no reference to such a doctrine. (J. H. Waggoner, 1884, The Atonement In The Light Of Nature And Revelation, pages 167-169)

As before remarked, the great mistake of Trinitarians, in arguing this subject, is this: they make no distinction between a denial of a trinity and a denial of the divinity of Christ. They see only the two extremes, between which the truth lies; and take every expression referring to the pre-existence of Christ as evidence of a trinity. The Scriptures abundantly teach the pre-existence of Christ and his divinity; but they are entirely silent in regard to a trinity. The declaration, that the divine Son of God could not die, is as far from the teachings of the Bible as darkness is from light. And we would ask the Trinitarian, to which of the two natures are we indebted for redemption? The answer must, of course, be, To that one which died or shed his blood for us; for “we have redemption through his blood.” Then it is evident that if only the human nature died, our Redeemer is only human, and that the divine Son of God took no part in the work of redemption, for he could neither suffer nor die. Surely, we say right, that the doctrine of a trinity degrades the Atonement, by bringing the sacrifice, the blood of our purchase, down to the standard of Socinianism. (J. H. Waggoner, 1884, The Atonement In The Light Of Nature And Revelation, page 173) (This is also found in Review & Herald, November 10, 1863, vol. 22, page 189)

The divinity and pre-existence of our Saviour are most clearly proved by those scriptures which refer to him as “the Word.” “In the beginning was the Word, and the Word was with God, and the Word was God. The same was in the beginning with God. All things were made by him, and without him was not anything made that was made.” John 1:1-3. This expresses plainly a pre-existent divinity. The same writer again says: “That which was from the beginning, … the Word of life.” 1 John 1:1. What John calls the Word, in these passages, Paul calls the “Son,” in Heb. 1:1-3. “God… hath in these last days spoken unto us by his Son, whom he hath appointed heir of all things, by whom also he made the worlds; who being the brightness of his glory, and the express image of his person, and upholding all things by the word of his power.” In other places in this letter this same exalted one is called Jesus Christ. In these passages we find the divinity or “higher nature” of our Lord expressed. Indeed, language could not more plainly express it; therefore it is unnecessary to call other testimony to prove it, it being already sufficiently proved.

The first of the above quotations says the Word was God, and also the Word was with God. Now it needs no proof—indeed it is self-evident—that the Word as God, was not the God whom he was with. And as there is but “one God,” the term must be used in reference to the Word in a subordinate sense, which is explained by Paul’s calling the same pre-existent person the Son of God. This is also confirmed by John’s saying that the Word “was with the Father.” 1 John 1:2; also calling the Word “his Son Jesus Christ.” Verse 3. Now it is reasonable that the Son should bear the name and title of his Father, especially when the Father makes him his exclusive representative to man, and clothes him with such power—“by whom he made the worlds.” That the term God is used in such a sense is also proved by Paul, quoting Ps. 45:6, 7, and applying it to Jesus. “But unto the son, he saith, Thy throne, O God, is forever and ever, … therefore God, even thy God, hath anointed thee with the oil of gladness above thy fellows.” Heb. 1:8, 9. Here the title of God is applied to the Son, and his God anointed him. This is the highest title he can bear, and it is evidently used here in a sense subordinate to its application to his Father.

It is often asserted that this exalted one came to earth and inhabited a human body, which he left in the hour of its death. But the Scriptures teach that this exalted one was the identical person that died on the cross; and in this consists the immense sacrifice made for man—the wondrous love of God and condescension of his only Son. John says, “The Word of life,” “that which was from the beginning,” “which was with the Father,” that exalted, pre-existent One “which we have heard, which we have seen with our eyes, which we have looked upon, and our hands have handled.” 1 John 1:1, 2. (J. H. Waggoner, 1884, The Atonement In The Light Of Nature And Revelation, pages 152-154)

Ques. What is Sunday, or the Lord’s Day in general?