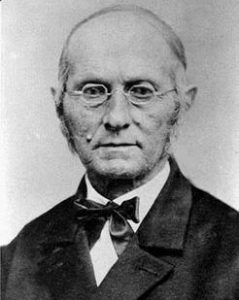 My parents were members of long standing in the Congregational church, with all of their converted children thus far, and anxiously hoped that we would also unite with them. But they embraced some points in their faith which I could not understand. I will name two only: their mode of baptism, and doctrine of the trinity. My father, who had been a deacon of long standing with them, labored to convince me that they were right in points of doctrine. … Respecting the trinity, I concluded that it was an impossibility for me to believe that the Lord Jesus Christ, the Son of the Father, was also the Almighty God, the Father, one and the same being. I said to my father, “If you can convince me that we are one in this sense, that you are my father, and I your son; and also that I am your father, and you my son, then I can believe in the trinity.” (Joseph Bates, 1868, The Autobiography Of Elder Joseph Bates, page 204)

One thing more: Much derision is made about those of our company that have joined the Shakers. I say it is a shame to them first, to have preached so clearly and distinctly the speedy coming of our Lord Jesus Christ personally to gather his saints – and then to go and join the Shakers in their faith, that he (Jesus) came spiritually in their Mother, Ann Lee, more than seventy years ago. This, without doubt in my mind, is owing to their previous teaching and belief in a doctrine called the trinity. How can you find fault with their faith while you are teaching the very essence of that never – no never to be understood, doctrine? For their comfort and faith, and of course your own, you say “Christ is God, and God is love.” As you have given no explanation, we take it to come from you as a literal exposition of the word; …

We believe that Peter and his master settled this question beyond controversy, Matt. 16:13-19; and I cannot see why Daniel and John has not fully confirmed that Christ is the Son, and, not God the Father. How could Daniel explain his vision of the 7th chapter, if “Christ was God.” Here he sees one “like the Son (and it cannot be proved that it was any other person) of man, and there was given him Dominion, and Glory, and a kingdom;” by the ancient of days. Then John describes one seated on a throne with a book in his right hand, and he distinctly saw Jesus come up to the throne and take the book out of the hand of him that sat thereon. Now if it is possible to make these two entirely different transactions appear in one person, then I could believe that God died and was buried instead of Jesus, and that Paul was mistaken when he said, “Now the God of peace that brought again from the dead out Lord Jesus that great shepherd of the sheep” &c., and that Jesus also did not mean what he said when he asserted that he came from God, and was going to God, &c.&c,; and much more, if necessary, to prove the utter absurdity of such a faith. (A letter written by Joseph Bates to William Miller, 1848, Past And Present Experience, page 187)