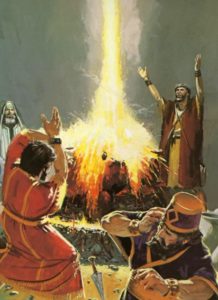 I found a unique statement today I thought I would share. I have been researching the Elijah message and how it is relative for us today. Among my study time I have been rereading Prophets and Kings and came across the following statement. Although I have read this book multiple times, in light of our current status and challenges within the church it made me consider these quotes with a fuller illumination from God.

“Through the long centuries that have passed since Elijah’s time, the record of his lifework has brought inspiration and courage to those who have been called to stand for the right in the midst of apostasy. And for us, “upon whom the ends of the world are come” (1 Corinthians 10:11), it has special significance. History is being repeated. The world today has its Ahabs and its Jezebels. The present age is one of idolatry, as verily as was that in which Elijah lived. No outward shrine may be visible; there may be no image for the eye to rest upon; yet thousands are following after the gods of this world–after riches, fame, pleasure, and the pleasing fables that permit man to follow the inclinations of the unregenerate heart. Multitude have a wrong conception of God and His attributes, and are as truly serving a false god as were the worshipers of Baal. Many even of those who claim to be Christians have allied themselves with influences that are unalterably opposed to God and His truth. Thus they are led to turn away from the divine and to exalt the human. The prevailing spirit of our time is one of infidelity and apostasy–a spirit of avowed illumination because of a knowledge of truth, but in reality of the blindest presumption. Human theories are exalted and placed where God and His law should be.” PK 177-8

In presenting the truth concerning the trinity being likened unto idolatry, those of us who present it today are often considered mistaken or even deluded and it is declared that idolatry and false doctrine cannot be likened one with another. Yet we see above a direct parallel laid out by the prophet herself.  The choice between the “Father & Son” versus the “Trinity” is the choice on Mount Carmel for modern Israel. We are to be the voice of Elijah to modern Israel.

“John the Baptist went forth in the spirit and power of Elijah, to prepare the way of the Lord, and to turn the people to the wisdom of the just. He was a representative of those living in the last days, to whom God has intrusted sacred truths to present before the people, to prepare the way for the second appearing of Christ.” {CTBH 39.1} CTBH – Christian Temperance and Bible Hygiene (1890)

I found it interesting that in the quote from “Prophets and Kings” above, the spirit of infidelity she relates to blindness calling it the “blindest presumption”. Remember that Laodicea was shown by Christ to desperately need eye salve. Sister White refers to this very same blindness in the following quote.

“Those who seek to remove the old landmarks are not holding fast; they are not remembering how they have received and heard. Those who try to bring in theories that would remove the pillars of our faith concerning the sanctuary or concerning the personality of God or of Christ are working as blind men. They are seeking to bring in uncertainties and to set the people of God adrift without an anchor. Those who claim to be identified with the message that God has given us should have keen, clear spiritual perceptions, that they may distinguish truth from error. The word spoken by the messenger of God is “Wake up the watchmen.”” Manuscript Release 7609, 10

Those who are holding to the old landmarks concerning the personality of God and His Son must wake up. Like the five wise virgins, we have been asleep to our duty as watchmen but we MUST wake up. Our brothers and sisters are still in darkness. We have always appreciated the above quote for its illumination of what is considered landmarks but we must also concede that it also reveals that those of us who have been blessed with truth have been sleeping concerning our responsibilities as watchmen. We must warn our brothers and sisters of the final deception being pressed upon them by the principalities and powers of this present darkness.

“Men have allowed their minds to become so darkened and confused by conformity to worldly customs and influences that they seem to have lost all power to discriminate between light and darkness, truth and error. So far have they departed from the right way that they hold the opinions of a few philosophers, so-called, to be more trustworthy than the truths of the Bible. The entreaties and promises of God’s word, its threatenings against disobedience and idolatry–these seem powerless to melt their hearts. A faith such as actuated Paul, Peter, and John they regard as old-fashioned, mystical, and unworthy of the intelligence of modern thinkers.”   PK 178

We must not allow ourselves or our brethren to be lulled into following the doctrines of men but must grow up in the knowledge of Jesus as the Son of God. Only in the truth concerning Christ’s Son-ship to His Father can we be safe from the winds of doctrine that threaten to sweep away our foundations of truth and our beloved church with them. Only in unity with Christ in the most holy place of the sanctuary can we find safety. I urge each follower of Christ to come into unity not only in knowledge but also the faith of and in Christ.

“Till we all come in the unity of the faith, and of the knowledge of the Son of God, unto a perfect man, unto the measure of the stature of the fulness of Christ: That we henceforth be no more children, tossed to and fro, and carried about with every wind of doctrine, by the sleight of men, and cunning craftiness, whereby they lie in wait to deceive; But speaking the truth in love, may grow up into him in all things, which is the head, even Christ:”(Eph 4:13-15)

In love we must work the work of Elias these final moments while God’s mercy is still extended to a fallen world and a church in apostasy. “Remember ye the law of Moses my servant, which I commanded unto him in Horeb for all Israel, with the statutes and judgments. Behold, I will send you Elijah the prophet before the coming of the great and dreadful day of the LORD: And he shall turn the heart of the fathers to the children, and the heart of the children to their fathers, lest I come and smite the earth with a curse.” (Mal 4:4-6)

The final work of Elijah will be done. The sure word of prophecy has revealed this to be a sobering reality. The time is now. The only question for those who have been given the solid platform of truth is; “Will you be among that voice?” If done in the selfless love of Jesus, the voice of Elias will also be singing the song of Moses and the Lamb!