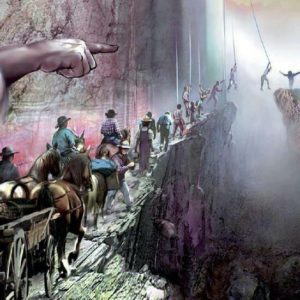 “But ye are a chosen generation, a royal priesthood, an holy nation, a peculiar people; that ye should shew forth the praises of him who hath called you out of darkness into his marvellous light:” (1Pe 2:9)

Consider if you will, that Zion is comprised of the people of God who are to be that chosen generation and have made a choice at some point to be part of that mission. They have chosen to accept God’s call to serve in that priesthood.

“These are they which follow the Lamb withersoever He goeth. These were redeemed from among men, being the first fruits unto God and to the Lamb.” Revelation 14:4. The vision of the prophet pictures them as standing on Mount Zion, girt for holy service, clothed in white linen, which is the righteousness of the saints. But all who follow the Lamb in heaven must first have followed Him on earth, not fretfully or capriciously, but in trustful, loving, willing obedience, as the flock follows the shepherd.  {AA 591.1}

Note that they are to be an Holy (without sin) people, girt for holy service, living in trustful, loving, willing obedience.

“They that trust in the Lord shall be as Mount Zion, which cannot be removed, but abideth forever. As the mountains are round about Jerusalem, so the Lord is round about His people from henceforth even forever.” “He shall redeem their soul from deceit and violence: and precious shall their blood be in His sight.” Psalm 125:1-3; 72:14.  {AA 86.1}

How is it then that with the power to abide forever and never to be removed from their high and holy state, some will be shaken out? The issue, it turns out, is over simple obedience by the redeemed whose souls were ransomed from deceit and violence. Will they continue to follow the Lamb wherever He leads them?  In our daily walk, Christ is ever revealing the unknown sins in our lives thus giving us a chance to remain lovingly submissive and obedient to him. Every sin, every violation of His commandments and statutes, every shortcoming must be revealed by Him for a time will come when Christ can no longer mediate between us and the Father. His work in us must be completed and we must be perfected by the transforming presence of Christ in our lives. This happens when we yield to Christ as He reveals daily to us our sins that were previously unknown to us. As we walk closer and closer with Christ, ever looking upon his life, new sins will be brought to light.  Sadly Satan seeks to prevent this and is often successful in his attacks.

Many, we are told, will reach some point where when confronted with these newly revealed sins, they will resist Christ and not give them up. When trials come, they fall off the path that is lifted high above the world falling into the darkness below. Some will view the price of giving up some pet or cherished sin as too much. Perhaps they will not accept deeper truth as it revealed, choosing rather to follow the popular traditions of the SDA church or being filled with pride, they will lean on their own understanding and refuse to consider that they are wrong. It was of these that Solomon spoke when He said, “ There is a way that seemeth right unto a man, but the end thereof are the ways of death.” (Pro 16:25)

Thus many will become by their own choices sinners and the sacrifice for unknown sin (as seen in the sanctuary service) that used to cover those sins committed in ignorance will no longer cover them. They who were once holy priests unto the Lord then become sinners in Zion. When trials come and the close of probation draws near, the shaking will come and they will be sifted out and blown away like chaff by winds of false doctrine and unbelief. It will become so prevalent that it may seem that the priesthood has failed in its mission.

The church may appear as about to fall, but it does not fall. It remains, while the sinners in Zion will be sifted out–the chaff separated from the precious wheat. This is a terrible ordeal, but nevertheless it must take place.–2SM 380 (1886).

As the storm approaches, a large class who have professed faith in the third angel’s message, but have not been sanctified through obedience to the truth, abandon their position and join the ranks of the opposition.–GC 608 (1911).

I believe friends that they are sifted out from among those who once had chosen to follow the lamb, sifted out and no longer part of the chosen generation and royal priesthood to God, a fellowship they once shared.

“The time is not far distant, when the test will come to every soul. . . . In this time, the gold will be separated from the dross in the church. True godliness will be clearly distinguished from the appearance and tinsel of it. Many a star that we have admired for its brilliancy, will then go out in darkness. Chaff like a cloud will be borne away on the wind, even from places where we see only floors of rich wheat. All who assume the ornaments of the sanctuary, but are not clothed with Christ’s righteousness, will appear in the shame of their own nakedness.–Testimonies, vol. 5, pp. 80,81.  ChS 49.3

In the previous quote we see that those blown away have at one point assumed the ornaments of the sanctuary being part of the royal priesthood but at some point have took off the white linen they were once clothed with. What then will become of them.

Behold, I will make them of the synagogue of Satan, which say they are Jews, and are not, but do lie; behold, I will make them to come and worship before thy feet, and to know that I have loved thee. Because thou hast kept the word of my patience, I also will keep thee from the hour of temptation, which shall come upon all the world, to try them that dwell upon the earth. Behold, I come quickly: hold that fast which thou hast, that no man take thy crown. (Rev 3:9-11)

“This is life eternal, that they might know Thee the only true God, and Jesus Christ, whom Thou has sent.” The members of Christ’s kingdom are members of His body, of which He himself is the head. They are the elect sons of God, “a royal priesthood, an holy nation, a peculiar people,” that they should show forth the praises of Him who has called them out of darkness into His marvelous light.  {FE 413.1}

Brothers and sisters, that time is now upon us. We are called into the body of Christ to shine the light as his holy royal priesthood.

“For thou art an holy people unto the Lord thy God: the Lord thy God hath chosen thee to be a special people unto Himself, above all people that are upon the face of the earth. The Lord did not set His love upon you, nor choose you, because ye were more in number than any people; for ye were the fewest of all people: but because the Lord loved you, and because He would keep the oath which He had sworn unto your fathers, hath the Lord brought you out with a mighty hand, and redeemed you out of the house of bondmen, from the hand of Pharaoh king of Egypt. Know therefore that the Lord thy God, He is God, the faithful God, which keepeth covenant and mercy with them that love Him and keep His commandments to a thousand generations; and repayeth them that hate Him to their face, to destroy them: He will not be slack to him that hateth Him, He will repay him to his face. Thou shalt therefore keep the commandments, and the statutes, and the judgments, which I command thee this day, to do them.” If God’s commandments are to be binding for a thousand generations, it will take them into the kingdom of God, into the presence of God and His holy angels. This is an argument that cannot be controverted. The commandments of God will endure through all time and eternity. Are they, then, given us as a burden?–No. “And the Lord commanded us to do all these statutes, to fear the Lord our God, for our good always, that He might preserve us alive, as it is at this day.”

We are the Israel that this promise was to find it fulfillment in. “And if ye be Christ’s, then are ye Abraham’s seed, and heirs according to the promise.” (Gal 3:29) That ye might walk worthy of the Lord unto all pleasing, being fruitful in every good work, and increasing in the knowledge of God; Strengthened with all might, according to his glorious power, unto all patience and longsuffering with joyfulness; Giving thanks unto the Father, which hath made us meet to be partakers of the inheritance of the saints in light: Who hath delivered us from the power of darkness, and hath translated us into the kingdom of his dear Son:  (Col 1:10-13)